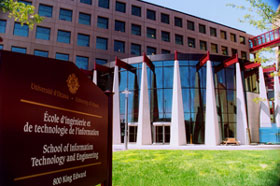 From 1999 to 2003, I have attended classes at the University of Ottawa. During those four and a half years, I have acquired a baccalaureate of applied sciences in computer engineering. I also had the chance of participating in the cooperative education program: this allowed me to gain work experience as I was studying. I graduated on december 2003 with High Honors.

My studies at the University of Ottawa touched a wide array of disciplines. Following are a few of those classes and what they have given me.

Programming classes. From C++ and Java to data structures and finishing with software design, I have learned a great deal about the workings of software.

A solid math background. I have followed, during my years at ottawa, a wide range of mathematical classes ranging from calculus and statistics to equation differentiation and complex analysis.

Good sciences base. Like all engineers, I have basic knowledge of chemistry and physics that allow me easily find what I need to know when my own knowledge is insufficient.

Work experience. Participation to my university's cooperative teaching program allowed me to gain work experience as I was attending school.

My university and personal studies coupled with my work experience exposed me to a variety of programming languages.

VHDL: Though I learned VHDL in my VLSI class, I only really because comfortable with it from participation to my 4th year university project: YARE.

Java: A few Java classes as well as involvement in the iRATE Radio open source project made me an efficient Java programmer.

C/C++: I was introduced to C/C++ programming through my university's CSI classes. I am currently working on a GTK+ project to further my knowledge of C.

HT/HP Basic: Having already leaned BASIC at a young age, I had no problem adapting to HT/HP Basic for my work at NavCanada.

Visual Basic: Programming language learned in high school. I use it from time to time when I need a quick-and-dirty program.

UnrealScript: The Unreal Engine programming language. I was exposed to this language through my work for Tactical-Ops and Damnation.

Perl: A simple and powerful scripting language that I use whenever I need a script under Linux.

Assembler: Used thorough a few of my computer engineering classes. I have used it to program on Intel 8085 and Motorola 68HC12 processors and micro-controllers. I also programmed assembler for the PIC12F675 of my Xbox Remote Add-on.

MATLAB: Not really a programming language, but I will list it here anyway. I used this tool extensively through my 4 years of university studies. My robotics project was written entirely with MATLAB.

For reference, here is a complete listing of the classes I attended to at the University of Ottawa:

Perl: As a side-effect of using Linux, I started learning Perl. Perl is a very developed scripting language that uses a C++/Java-like syntax. Whenever I need to write a script to do anything from DNS updates to mass file renaming, I turn to Perl.

UnrealScript and UnrealEd: In the summer of 2000, I started experimenting with the UnrealEd map editing software. My initial goal was to create an online replica of my university campus. As I was getting more knowledgeable with the editor, I started to learn the UnrealScript programming language used in Unreal games. Around that time I got involved with the Tactical-Ops team, eventually producing code and maps that would be used in a retail game.